Some of the most beautiful structures in Spitzer GLIMPSE data are the bubbles. Bubbles are regions of gas, usually found around newly formed stars, often with shells of material surrounding them (the green 8 μm emission above). These appear as rings in the GLIMPSE images and can vary in appearance from strikingly prominent to intriguingly faint. They can be anything from complete circles and ellipses, to fractured, fragmented remains.

As part of Project IX we’re going to ask you to find and measure these bubbles. Researchers can use this information to learn a lot about how these objects form and how they trigger star formation. 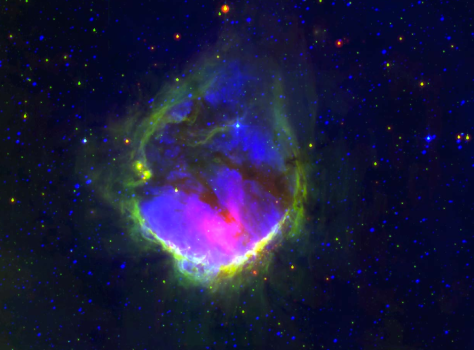 Above is an image of RCW 120, the titual “perfect bubble” from a 2009 paper by Deharveng, Zavagno, Schuller, Caplan, Pomarès and De Breuck. This colour-composite image shows Hα emission in blue, 8 μm emission in green and the 24 μm emission of small dust grains in red. The image is approximately 24′ degrees wide.

The green material has been swept up as the region expanded, after the formation of a massive star in the centre. There are about 2000 Solar masses of neutral material here, and this has fragmented into lumps. This is where star formation is occurring. The authors of the study found 138 potential star-forming objects in the ring around RCW 120.

In 2006, a group of astronomers visually inspected the GLIMPSE data for bubbles and catalogued their results in a paper titled ‘The Bubbling Galactic Disk‘. I’m a sucker for a great paper title. The team behind this study has been looking at the GLIMPSE data ever since. As mentioned above, bubbles are important features in the study of star formation. Here’s how they are described in ‘The Bubbling Galactic Disk‘:

The study of bubbles gives information about the stellar winds that produce them and the structure and physical properties of the ambient ISM – interstellar medium – into which they are expanding. Additional physical insights include the hydrodynamics of gas and dust in expanding bubbles, the impact of expanding bubbles on magnetic fields in the diffuse ISM, and mass-loss rates during the evolution of stars.

In 2006 322 bubbles were visually identified by just a handful of people. Since that time two things have changed. Firstly, there is now a lot more data, and therefore more bubbles. Spitzer has also continued to map more of the galactic plane for the GLIMPSE360 project – more on that in a later post. Secondly, the Zooniverse now exists!

Everytime the Zooniverse and bubbles have been mentioned together, someone has been there saying that we should get the public to find and measure them. Whether this is between Chris, myself and others at Zooniverse HQ or between Grace Wolf-Chase at Adler Planetarium and various members of the ‘The Bubbling Galactic Disk‘ study. Bubbles and the Zooniverse should be a match made in the heavens.

Why are bubbles such a good target? For many reasons. They are not only amazing to look at, but also are numerous in the GLIMPSE data. They are tricky to measure but not impossibly hard. They are scientifically valuable objects to catalogue and measure the properties of, and they require more than one independent, human measurement to get a good handle on – this is key of course.

Many of the folks behind the ‘The Bubbling Galactic Disk‘ are part of the Project IX science team. We hope that everyone out there in the Zooniverse community can help refine and expand the existing bubble catalogue as part of Project IX. With the addition of new data, we also hope to find many new bubbles.

We are currently developing the bubble tool – the first user interface portion of the Project IX site  – which will have similarities to the Moon Zoo crater tool. We hope to be able to share it with you all soon so that you can help us to test and refine it. It is exciting to be able to involve everyone at this early stage.

If you’re interested in following this project and its take on bubbles, I’d suggest reading ‘The Bubbling Galactic Disk‘ and looking at the GLIMPSE website. If you have any questions – let us know. Bubble are just one thing we can see in the GLIMPSE data. More posts will follow about other scientifically useful objects lurking in this amazing infrared archive.

10 thoughts on “The Bubbling Galactic Disk”

This is the blog for the Milky Way Project. Visit the main site at milkywayproject.org or find out more about the Zooniverse at zooniverse.org.